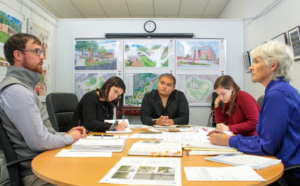 The Virginia Tech Community is thriving with updating the Blacksburg area. VT and the CDAC are taking it upon themselves to revitalize the area. Soon this quiet corner of Virginia will become an asset to the state. Read the article below to find out more on these updates to the Blacksburg area.

One such community is Dante, a former coal and railroad census-designated place of fewer than 700 people in Russell and Dickenson Counties. Like many of Southwest Virginia’s rural communities, Dante is now too small to be an incorporated town. In its heyday, the population reached almost 5,000 and company money fueled schools, businesses, and homes.

With coal gone, that changed. Families in search of jobs relocated, and the community’s physical infrastructure was largely abandoned or neglected.

However, Dante has recently started a new chapter of its history. Revitalization comes with help from Virginia Tech students and the Community Design Assistance Center (CDAC), a largely grant-funded organization within the College of Architecture and Urban Studies. But the community isn’t just trying to grasp hold of its slipping past. Dante is using CDAC’s assistance to step into a new, sustainable future.

“CDAC has 30 years’ worth of partnership and trust-building in communities throughout the commonwealth where students provide vital conceptual design assistance to underserved communities,” said Elizabeth Gilboy, director since 2000.

Through the center, Virginia Tech faculty and students help develop high-quality designs and plans for development and revitalization projects.

Communities can then leverage these conceptual designs and project plans when applying for additional state and federal funding – meaning CDAC designs often serve as the bridge between a community’s vision and the dollars necessary for implementation.

Since 1988, CDAC has given a boost to over 280 communities like Dante.

A recent award of $300,000 to CDAC supplementing a 2015 grant of $400,000 from the Environmental Protection Agency’s (EPA) Brownfields Assessment Program validates CDAC’s approach. A federal program offering old coal communities like Dante the opportunity to address both suspected and undiscovered hazardous site conditions, it supports redevelopment efforts without requiring communities to incur the potentially crippling costs of environmental assessments.

The EPA’s funding to CDAC, as well as an Urban and Community Forestry Program grant from the Virginia Department of Forestry, helped Dante create new plans for the former train depot as well as a campground and trailhead at the site of the former Arty Lee school. Funding from additional government agencies for structural improvement, building demolition, and some initial site work for the new campground soon followed.

According to Nick Proctor, CDAC’s landscape designer and project manager, the community has received almost $700,000 in multiple state and federal grants as a result of the center’s collaboration.

The conceptual designs and plans produced largely by Virginia Tech students have been key to securing this additional funding. For example, in 2017 CDAC partnered with the university’s landscape architecture program and the Dante community to host an interactive design charrette between 10 student design teams. During the collaborative meeting, plans for several potential renovation projects were developed and presented to community members. Students gained valuable experience, and Dante gained high-quality design packages that helped kick-start the community’s revitalization process. 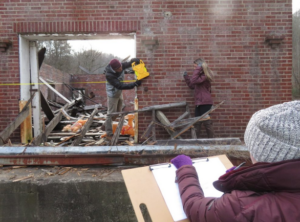 Learning to focus on clients and their cultural sensitivities is an essential aspect of students’ education as well as a link to Virginia Tech’s service ethic. Proctor notes that respect for heritage will serve students well in their future careers.

“There’s a local flavor that creates authenticity, and you have to be sensitive to that both in your design and in how you actively engage community members throughout the design process,” he said. With CDAC, students learn to translate academic objectives they learn in the studio into realistic community projects that can lead to smart, sustainable growth.

The educational benefit of working with CDAC is not just to students. Local leaders learn to plan, pursue, and manage projects from conception to completion. These “community champions,” Gilboy said, provide an enthusiastic vision and long-term support that lead to project success.

Proctor stressed that it’s important for communities to shift how they think about collaboration. “They’re more likely to be successful when they move from the mindset of ‘How is CDAC going to help us?”’ Proctor said, “to asking, ‘What can we do to make our vision possible?’”

The Dante Community Association, as well as local leader Lou Ann Wallace, has been essential to Dante’s progress. According to Wallace, “Our success story is CDAC’s success story.”

Momentum is not slowing. Next, CDAC will help Dante plan for renovations to historic coal homes in hopes of attracting new residents. This infill development project will allow new construction to blend seamlessly into existing community spaces.

Noting that other state investments put fiberoptic cable on the main road to Dante, leaders are encouraged that 21st-century technologies will attract residents who can work anywhere in the global innovation economy.

Soon, they believe, a location in a quiet corner of the state will become an asset – not a liability.