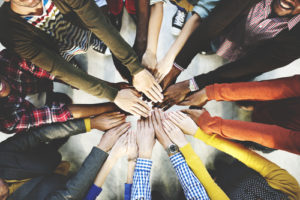 “I’ve seen a lot of projects like this in small towns in Virginia, including Richmond when I was mayor. But I’ve not seen a project driven by a sort of intentional group of young people who are saying, ‘Lets make a mark on our community in a good way,’” Virginia Sen. Tim Kaine said after a visit to Pulaski’s downtown revitalization zone Friday.

Kaine decided to stop by Pulaski during a visit to Southwest Virginia after his assistant told him about a group of young entrepreneurs working to bring life back to Main Street. The group’s projects were outlined in an editorial, or blog, written by Pulaski County Administrator Jonathan Sweet and published in The Southwest Times earlier this year.Sweet has aptly named the group of young men, “The Tribe.”

Nine members of The Tribe, along with Pulaski investor and MOVA Technologies owner Steve Critchfield, Sweet, Pulaski Mayor David Clark and other representatives of the town took Kaine on a tour of The Tribe’s projects. The projects, all at various stages of development, include a New Orleans-style cafe, business/print shop, tap house and a virtual reality studio.

“I’m psyched about this because you can read about it in the paper, but seeing is believing,” Kaine said. “It’s exciting,” The projects in which members of The Tribe are involved also includes MOVA’s development of new filtering technology that could be used in a wide variety of filtering needs, including carbon burning technology, and enable filtered products to be safely recycled for other uses.

An aspect of the project Kaine was particularly impressed by is the fact the young men are not only investing in the community as businessmen, but also as citizens. Tribe member Luke Allison, A.M. Squires Trust/MOVA, said the men are purchasing homes in Pulaski and getting involved in local community organizations, such as Rotary and Friends of Peak Creek. “They’re saying, ‘We’re not just making this building our project, we’re making this community our project,” the senator noted.

Critchfield said the low cost of housing and business property in Pulaski is enabling the young men to become residents and start businesses. They are buying formerly blighted properties and returning them to the tax files as their own residential properties and will ultimately raise their families here. However, Allison pointed out they also are looking to give back to the community. They’ve purchased a former church and are converting it into a three-bedroom house that will be used to help persons bridge the gap between coming out of incarceration and entering sobriety to becoming active, working members of society. Kaine felt that was an important contribution to the community. He said he learned of the problem of adequate housing for those re-entering society during a visit to Washington County’s Drug Court graduation earlier in the day Friday.

“You don’t want to have someone go through recovery and then not have housing or a job when they get ready to move to the next level,” he said. Allison said Pulaski County is now in a good place for available jobs and programs to help place people in jobs, but the virtual reality business they are creating will also help local businesses train employees. Virtual reality software will not only help train employees for their new jobs, but will also save companies money on training. He explained the software could be used to let local students find out which jobs they don’t like before going through the full training and then quitting.

The virtual reality and New Orleans-style food are destination businesses that will draw visitors to the town from other locations because neither are available nearby. Critchfield said he had Virginia Tech conduct a survey to determine how many more residents Pulaski needs to help support its businesses. The figure was 2,000. He and Allison pointed out that is another reason it is so important the young men and himself are not only starting businesses here, but also living here. However, they also are giving the local residents and businesses what they want, as well. The café and print shop are businesses residents indicated they wanted downtown in a survey conducted by Virginia Tech.

Kaine asked whether there is local excitement about The Tribe’s contributions or anxiety on the part of longtime residents. Mayor Clark said there has been some anxiety, but the majority response has been excitement over the new energy in town. He recalled when he was elected to town council 13 years ago that his father’s best friend called to tell him change isn’t good.

Critchfield said he is pleased with the responsibility The Tribe has shown.“I can help mentor the group on entrepreneurship, but not responsibility. This group of 20- and 30-year-olds are proving their responsibility well,” he said. “Every little town or city is different. I understand that. There are revitalization projects going on around town. But some of the energy that’s coming out of this one is going to be able to be copied,” Critchfield said. He was referring to a template The Tribe has used to stack aggregate capital to gain access to historic tax credits, which are a large sum of the Qualified Restoration Expenditure (QRE) needed in such revitalization projects.

Allison told Kaine they want to use the template not only in Pulaski, but Abingdon, Marion and other towns throughout Southwest Virginia “to show there is an economically feasible way to get historic tax credits.” Critchfield added, “We had to figure out the tax credit thing because we were desperate. Now we have a template they’re going to be able to use all across the state and in other states.” While touring the buildings that will contain The Tribe’s businesses, Kaine and Allison had a discussion on what federal legislation might make the group’s processes less cumbersome and more beneficial for restoring downtowns.

Sweet told Kaine, “All of these young folk are creating their own community. There aren’t many places you can economically do that, but we have the right prices.” Kaine said he would like to see more projects like The Tribe’s in Virginia. He noted there’s a lot at stake in the project working, not just for Pulaski, because “if it works, it will convince other groups of young people they can do this too.”