Later That Night: The Dunlap Broadsides 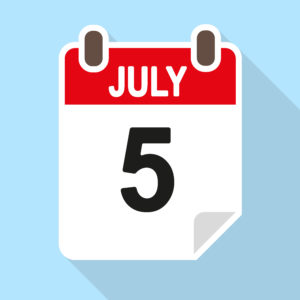 Have you ever celebrated July 5th?

If you own a small business, you should.

By the time the Second Continental Congress convened in the May of 1775, the American Revolutionary War had already begun.

And, over a year later, on July 2nd, the delegates to the Second Continental Congress voted to declare independence from Great Britain.

Two days later, drafters had completed the document: The Declaration of Independence; and, on July 4th the Second Continental Congress approved the draft and formally declared independence.

Just when America needed it most – a small business came to the rescue.

Late on the evening of the 4th Hancock met with John Dunlap, who owned a small printing business near where Congress convened.

He needed to mass produce the document so it could be immediately be dispatched to all the Colonies and to the soldiers in the field.

The twenty-nine-year-old Dunlap did what most small business owners do: he leapt into action.

On the night of July 4th, he was the man for the job.

Dunlap worked all night typesetting Jefferson’s handwritten Declaration so he could run printed copies of the document for distribution.

By the morning of July 5th, he had printed nearly 200 copies – with typeset signatures of Hancock and Thomson.

Dunlap’s document – called a “Broadside” because it is one large piece of paper with nothing printed on the back – remains one of America’s most valued documents.

Twenty-six copies survive in museums and in the early 2000s one Dunlap Broadside sold at auction for $8,000,000.

As you celebrate our nation’s independence, I hope you’ll remember that 243 years this morning copies of the Declaration were sent all over the Colonies thanks to a small business owner….just across the street…who worked all night.