Mitchell Law Firm is located in the Corporate Research Center at Virginia Tech and we like to keep abreast with campus happenings and news. Read below for Virginia Tech’s plans for the Innovative Campus and partnership with Amazon. 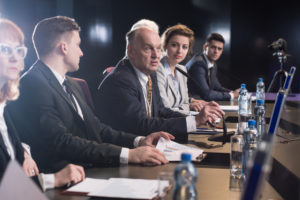 The leaders of Virginia Tech’s Innovation Campus outlined their progress on the splashy project during a public town hall Thursday.

Sponsored by the university’s Student Government Association, it was one of the first public opportunities for school leaders to interact with the Blacksburg community about the planned Alexandria Tech campus that was instrumental in luring Amazon to locate its HQ2 in Northern Virginia.

The bottomline: Tech’s new campus — to be located in Alexandria — is coming and opportunities to help shape it will be plentiful moving forward, the leaders said.

“This move is a foundational element to our future,” Sands said.

Tech made the nationally publicized announcement of the Innovation Campus in November, coinciding with Amazon’s announcement.

Amazon wanted, among other conditions, access to engineering talent when it conducted a nationwide search for new headquarters locations. Virginia Tech has promised to check that box with the new 15-acre, $1 billion campus, helping the state secure one of its biggest economic development wins in history.

Tech and the state have both already pledged $250 million each to the Innovation Campus project, which will host hundreds of technology-related graduate students.

Tech leaders have also said growth in Blacksburg will be immense due to the Amazon connection — including 2,000 additional undergraduate students and 130 new faculty jobs — thanks to state support for a “tech talent pipeline.” That legislation includes up to $800 million in state money over two decades supporting growth in computer science and related fields by 25,000 undergraduate degrees across Virginia college campuses by 2039.

So far, Salmon said, there’s plenty of work to do on the Innovation Campus. She said the university has only hired two employees there so far, one being a community relations liaison.

Moving forward, Sands said, Tech’s physical locations are separated, it will have engagement everywhere, he said.

“We are not three separate campuses,” in Blacksburg, Roanoke and Northern Virginia, Sands said. “But these are three different portals where we can engage people.”

Sands said the university is looking at ways to allow employees to move between campuses for long-term appointments in Northern Virginia and in Blacksburg, but the school will need to keep studying that.

Community members at Thursday’s town hall were curious about how growth would influence Blacksburg and how disciplines other than computer science and engineering would be involved in developing the Innovation Campus.

On growth locally, Sands said adding 2,000 undergraduates has been part of the plan with the town for the last several years and local officials are prepped for it. Once the university hits 30,000 in Blacksburg, the town will be tapped out for undergraduate growth and that the school will attempt to maintain that number in the future.

But no matter what, Tech intends to work with local officials, Clarke said.

“We will move forward hand in hand,” he said.

On involving all academic disciplines, Clarke said that changing technology can’t simply be handled by computer scientists and engineers. People from every part of the university will need to be involved, he said.

“We are committed to building depth across every piece of this institution,” Clarke said. “Our land-grant mandate demands growing outside computer science and engineering.”

Engagement between students, faculty, staff and administration will be critical to the success of the campus moving forward, said Sophie Campos, academic affairs chairwoman of the Student Government Association.

Thursday’s event was the first of more, currently unscheduled, town halls between Tech administrators and the community.

Campos said she was excited to gain context on the Innovation Campus and hopes more students will want to hear more about the project moving forward.