Uber Finally Did It. 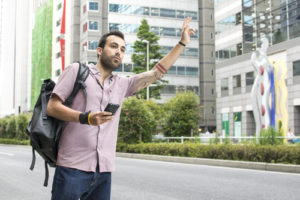 What did they do?

Start a service where you pay around $225 to summon Uber Copter for a helicopter ride JFK airport to Manhattan?

Yes, they did that, but that’s not what I mean.

Announce last Friday that both the COO and CMO are leaving?

Yes, as the CEO said “I’ve learned that at every critical milestone, it’s important to step back and think about how best to organize for the future,” said UBER CEO Dara Khostrowshahi. (important lesson there, by the way)

What did UBER finally do on Wednesday that was so important?

Finally, on Wednesday it hit the coveted $45 per share and traded above its IPO price.

The IPO was hyped, then failed to meet expectations.

People canned it. The $8.1 billion raised in the IPO was disappointing, even with a $70B market cap. According the CNBC, “Uber debuted below its IPO price on Friday and ended up down more than 7%, crawling across the finish line with a valuation below $80 billion.”

Setting expectations is a tricky business. Earlier people projected a $120B valuation, even with the disappointment, don’t feel sorry for the founders and early investors. Numerous reports have relayed the stories of new millionaires.

Good for them. According to CNBC, the serious money did well too. Softbank’s UBER value was $10.2billion; former CEO, Travis Kalanick, $5.3B; Saudi Arabia’s Public Investment Fund, $3.4B; and, Alphabet (Google) $3.3B.

After reaching its IPO price on Wednesday, the stock fluctuated the rest of the week closing below $45 at the end of the day Friday.

Then, with the announcement of major leadership changes the same day, the CEO began resetting expectations.

“Investors are always biased to invest in things they themselves understand. So venture capitalists like Uber because they like driving in black town cars. They don’t like Airbnb because they like staying five-star hotels, not sleeping on people’s couches.”
-Peter Thiel

Congratulations to one of our own! Young Greg Mackey has graduated from Rainbow Riders Pre-School and will charge into Kingergarten next year! Way to go Greg.