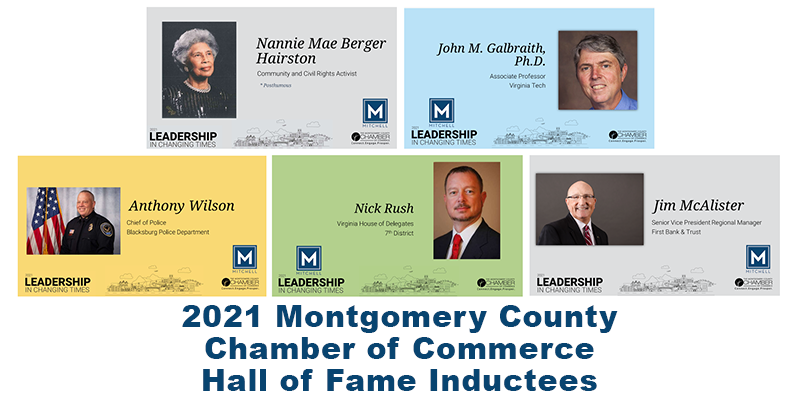 In 2020 the Montgomery County Chamber of Commerce chose to begin to honor those individuals who have changed the landscape of our economy and exemplify the Chamber’s mission to, “promote and develop a positive environment for the operation and growth of business in Montgomery County.” The Hall of Fame focuses on those individuals who laid the foundation for our success or who continue to build the foundation for the future success of our community.

Mrs. Hairston lived a life of dedication, improvement, and courage. She was considered a friend to many and a valued advisor. She spent a lifetime fighting for educational opportunities for everyone and was so impactful that the Nannie B. Hairston Community Service Award was created in her honor. Among her many accomplishments, Mrs. Hairston was the founding member of the Montgomery County League of Women Voters and held leadership positions in the Montgomery County – Radford – Floyd County brand of the NAACP. 1

Because of her, Montgomery County is a better place – and we are a better business community.

We are honored to sponsor the Montgomery County Hall of Fame and celebrate Nannie Mae Berger Hairston.

The 2021 inductees of the Montgomery County Chamber of Commerce Hall of Fame included Dr. John Galbraith.

In 2009, Dr. Galbraith founded an outreach ministry at St. Mary’s Catholic Church in Blacksburg which later expanded to include all of Montgomery Country, the New River Valley, and beyond. This vision – with the early help and guidance of Christy Gabbard and Marilyn Galbraith – would become the NRV Glean Team. This group now assembles people and organizations to grow, gather, and recover – or “glean” – excess fresh food from local farms, as well as purchase bulk food.

Dr. Galbraith was inducted in the Montgomery County Hall of Fame because when he saw a need – making vegetables and fruit available to low-income families in our region – he acted – and thousands of people have felt his impact and embraced his vision.

We are honored to sponsor the Montgomery County Hall of Fame and celebrate Dr. John M. Galbraith.

As a Blacksburg native, a Marine, and a Virginia Tech graduate, he is a 21-year veteran of the Blacksburg Police Department – where he advanced from patrol officer to captain of the Services Division to Chief of Police. He has also served as a volunteer firefighter for more than 30 years.

Chief Wilson was appointed Chief in March of 2014. Through his leadership and passion, he raised funds to initially finance two years of community college for students who perform 80 hours of community service with the Police Department.

His resume of public service is robust and his accomplishments many. He has managed the Blacksburg Police Department with honor, integrity, honesty, and compassion.

We are honored to sponsor the Montgomery County Hall of Fame and celebrate Chief Anthony Wilson.

After 12 years on the Board of Supervisors, in 2011 he was elected to the House of Delegates – representing a big portion of the New River Valley – and he was re-elected 4 more times, never receiving less than 64% of the vote.

Nick is also a very accomplished and successful businessperson, starting and growing his own business. Nick was first elected to the Board of Supervisors and then as a citizen legislator in the Virginia General Assembly.

We are honored to sponsor the Montgomery County Hall of Fame and celebrate Nick Rush!

The 2021 inductees of Montgomery County Chamber of Commerce Hall of Fame include Jim McAlister. Jim is a recognized leader in Virginia’s banking community and well known for his community engagement. He is one of those rare individuals who seems to have a life of equal measures of community service and professional success.

Jim is a force in our region’s Young Life organization, having served as the Chairman of the Area Committee for Young Life in the New River Valley for the past three years. His engagement in Rotary, as an Eagle Scout himself, is a big supporter of local scouting, having chaired Christiansburg Friends of Scouting from 2012-2014.

Jim is respected in our business community. He has been on the Board of Directors of the Blacksburg Partnership, serves on the Virginia Bankers Association Lending Executive Committee, and has served on the Executive Committee of our Chamber’s Board.

We are honored to sponsor the Montgomery County Hall of Fame and celebrate Jim McAlister!

Congratulations to the 2021 inductees of the Montgomery County Chamber of Commerce Hall of Fame!